My Wild Month on the Road: Mobilize Recovery Across America 2022 Bus Tour 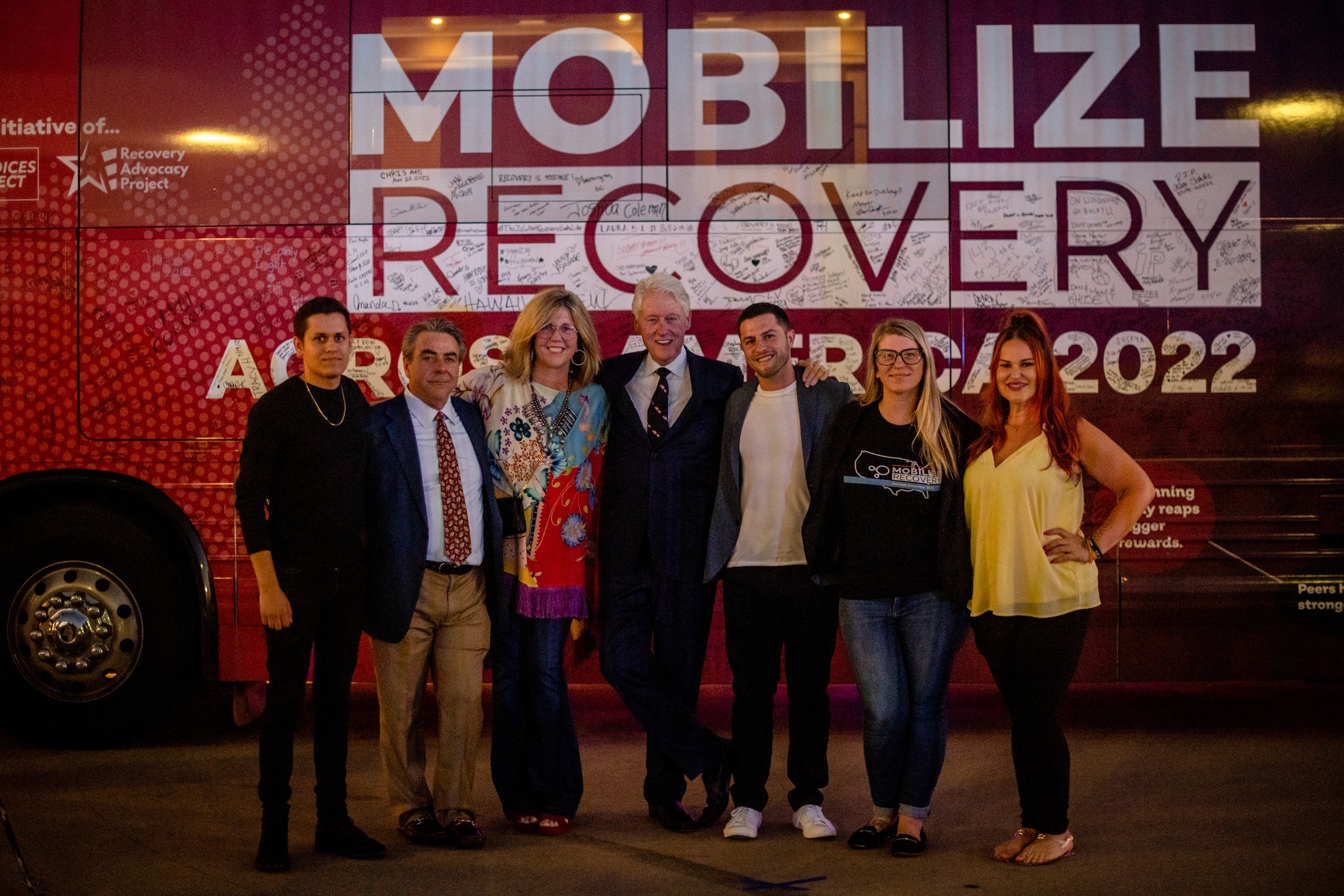 The idea seemed ridiculous.  One month. On a bus. Traveling across the United States.

The plan was for a group of advocates and organizers to travel across the nation during September — National Recovery Month —  in an effort to highlight diverse pockets of recovery from Substance Use Disorder (SUD). Ryan Hampton, co-founder of Mobilize Recovery, asked if I would join the Tour to cover social media and curate online content. Me? Sure, I attended Mobilize Recovery in Las Vegas previously, but, Me? Really?? My soul screamed with excitement and dread all at the same time.

My mind went into overdrive on my new hyperfocus. How can I make this work? Who will watch my child? What about my dog? Can I get the time off from work? Dozens of questions swirled through my head. I am the type of person who gets REALLY excited when posed with a new opportunity.  It could be anything – a new training course, a pair of shoes that I see in the mall, a career opportunity, a new hobby. But, this excitement was different: this was about recovery. I knew I had to figure it out and do it. But I was scared and not sure I could make it work.

Not only am I a single parent, but I had just got full residential custody of my child a few months prior after years of fighting for them in the New Jersey Family Court system, and I wanted to be there for my sixth grader’s first day of school. I have a very anxious and needy Beagle Yorkie Poo. I also have three or four jobs floating around at all times.

Again, the idea seemed ridiculous. But then, good things started to happen.

My niece was willing to watch my child. I scoured dog-sitting sites for prices and found one within my budget. Leadership at my full time job with WEconnect Health was not only supportive of me taking the time to go on the Tour, but I was able to facilitate a partnership between Mobilize Recovery and WEconnect!

It was as if the universe was conspiring in my favor, as a beloved mentor and friend always says. It all seemed so incredibly real and important, but also wildly ridiculous and imaginary at the same time. Ironically, that is how living my life in recovery often feels. I was in.

The Mobilize Recovery Across America 2022 Tour began in Las Vegas on Septemeber 5, 2022 and criss-crossed the nation for 32 days hitting 25 states, traveling 10,403 miles, and hosting over 35 organizing events, ultimately ending in Spokane, Washington. It was the quintessential way to honor and elevate Recovery Month. At every stop, we met with people in, seeking, or supporting recovery; every town and city people signed the bus with messages of hope and recovery anniversaries. Walking around the bus I saw  tributes to loved ones who fell victim to preventable deaths from stigma, punitive and antiquated policies, shame, and myriad barriers to treatment, recovery support services, and harm reduction. By the end of the Tour, the bus was covered with thousands of messages and names that represented an extraordinary amount of strength and resilience.

But the Mobilize Recovery experience wasn’t just about joy or honoring Recovery Month, it was about organizing for change.

Mobilize Recovery began in 2018 as a one-time two-day conference in the scorching Las Vegas desert hosted by co-organizers Ryan Hampton and Garrett Hade. Earlier that year they applied for and won a contest on Facebook for seed funding, and four years later the “one-time” conference morphed into a national movement.

The Tour brought us to Pennsylvania Avenue in front of the White House, the steps of the California State Capitol, at the Presidential Library in Little Rock, the Catawba Nation Indigenous reservation in South Carolina, and the Facebook (Meta) headquarters. Together, a group of unpolished, passionate ragtag advocates crossed the country on a tour bus fit for a political candidate. We distributed over 11,000 fentanyl test strips, 10,000 free overdose response kits with Naloxone, registered new recovery voters, hosted organizing and public narrative trainings, and presented new ways for the recovery community to engage. In just under one month, the Mobilize message reached over 1 million Americans through Facebook and iHeart Radio. There was a refrigerator on the bus loaded with donated and delicious Doughp, and the entire back of the bus was filled with clear industrial sized bags of naloxone kits and fentanyl test strips. It truly was a sight to see.

And, I was there for every minute of it! Me!

As the social media content strategist for the tour, it was my job to conduct in-person interviews at events, post updates on tour stops, collect sound bites, capture photos and videos, create and share material for reels.  I even started a Mobilize Recovery TikTok, which meant I had to ask my 11-year-old to train me on this new (to me) social media platform. Some days I live Tweeted (before Twitter lost its mind), other days I went live on Facebook, and other times I filmed short teaser clips for Instagram reels and/or TikToks.

I was also blessed to be the “Shame Dame” for the Shamebooth, a visual and audio artistic exhibit that invites people to record the things they are ashamed of in the spirit of healing and understanding. With a classic Tiffany blue phone and hunter green velvet stool, people were invited into the quiet booth, picked up the phone and spoke words they never spoke before…leaving their shame and guilt in that booth on that phone. What a gift. Shame kills. Outside the booth, I donned a fire-engine red Shame Dame jumpsuit and every single person that exited the booth felt a sense of freedom and peace. As a nationally certified peer coach, I was there to help them process their feelings.  To be able to embrace and support folx in this capacity on their individual journeys had to be one of the best parts of the tour for me.

For me, some of the highlights included:

If you want to relive each bus tour stop on the 2022 Mobilize Recovery Across American experience, click here. I could go on and on, as it was truly magical.

As a lifelong overthinker, I meticulously mentally planned for every possible “what if” scenario.  The ONE thing I did not consider was the absolute exhaustion of the constant change in time zones. Some days, we were in two or three different time zones, and I quickly realized I was burnt out from the changes in time. I couldn’t get on a good sleep schedule which affected me more than I thought it would. I am also a neurodivergent person and abide by the Spoon Theory (life changer), and I found that I was using all of my daily allotment of energy **spoons** by midday. and I was exhausted. I was always “on” or preparing to be “on,” and as a person who struggles with social anxiety and extroverted introvertism, socializing and performing doesn’t come natural to me. I must prepare. So I was basically “on” for an entire month, and I was burnt out. While on the road, some ways I dealt with the burnout was a great set of noise-reducing over-the-ear headphones, a comfy hoody with the hood up, and dark oversized sunnies. I needed to work in bouts of serenity between the madness, and somehow, I made it work. Rest assured, once I arrived back home in New Jersey at the conclusion of the tour, I allowed myself to hibernate for a full month and felt not one ounce of guilt!

By traversing our enormous country, I realized how amazingly diverse and powerful the recovery community is. The one common theme throughout the whole month was that recovery is beautiful, and recovery is everywhere.

If I learned anything from my wild month on the road, it is to do the thing that scares you the most. It’s most likely worth it. Looking back, I am so incredibly grateful that I stepped out of my comfort zone and embarked on this wild nationwide Tour.

WEconnect Health is a behavioral health app centered on contingency management paired with the real-world expertise of Peer Support Specialists and people in recovery. For more information on Mobilize Recovery and to get updates on what’s in store for 2023, click here.

Sheilah Powell
Peer Recovery Support Specialist
Sheilah Powell is a person in recovery, a Peer Recovery Support Specialist and Content Lead for WEconnect Health, and lifelong New Jersey native. She is also a training facilitator, a certified CCAR Recovery Coach Professional, and an independent blogger and social media curator. A mother of three, Sheilah enjoys yoga, reading and spending time with her dog, Starla, at the Central Jersey bayshore area. To contact Sheilah, email Sheilah@weconnectrecovery.com or follow her on Facebook, Instagram and TikTok @SheShePowell.