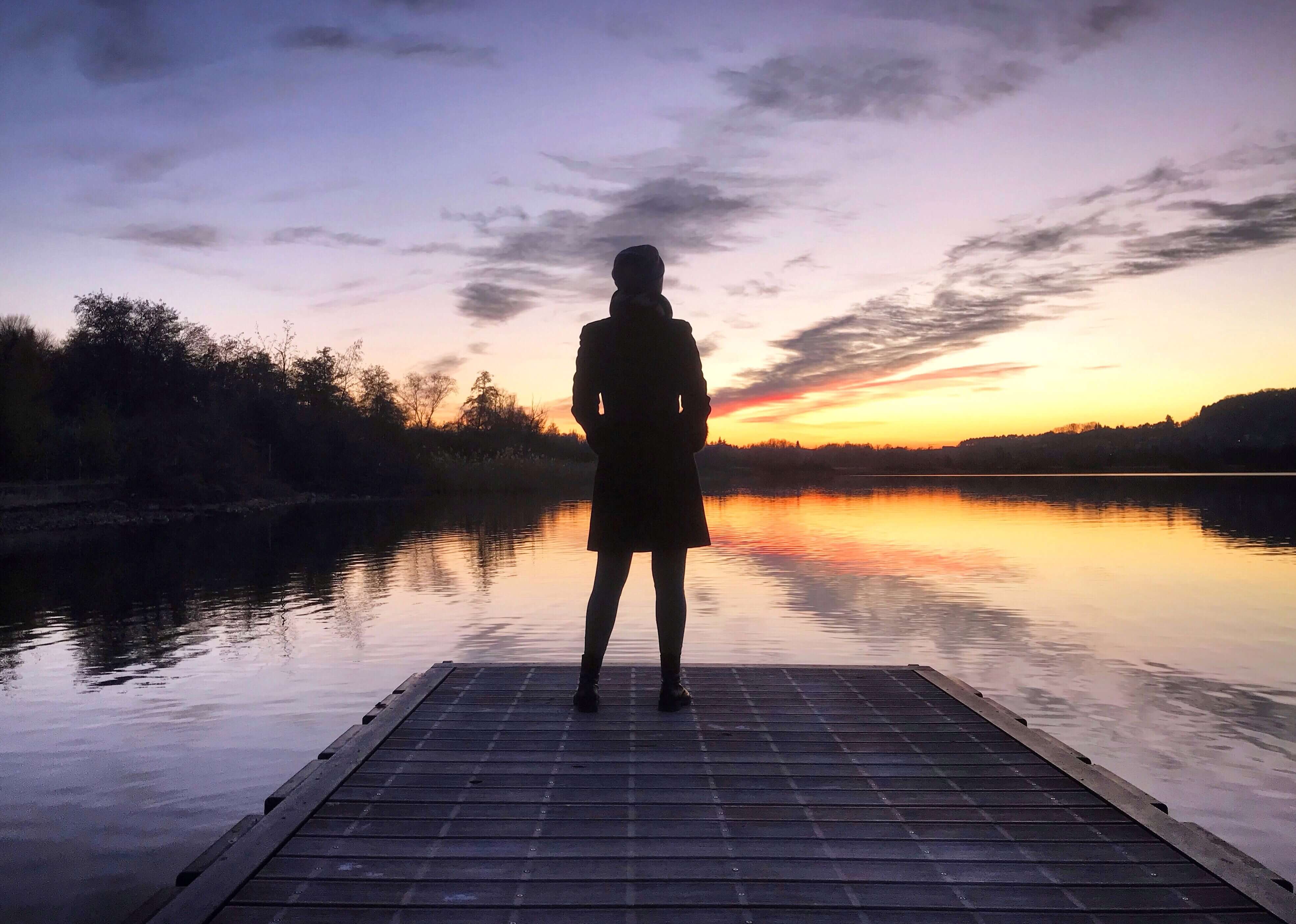 My earliest emotional memories involve a mixture of warmth and happiness and dread and unease.

As a child, I grew up in a rather safe and healthy household, but I was preoccupied with a fear of death. The only time I was not afraid was when I was playing sports, reading a book, or studying. This resulted in me spending a lot of time on a soccer field or basketball court, or studying, which were healthy ways to relieve what I now realize was anxiety. My escape into athletics and academics also allowed me access to opportunities I might not otherwise have enjoyed. I received scholarships, played on high-level basketball and soccer teams, and was able to travel the country competing. Until age 14, this default way of managing my anxiety seemed foolproof.

Then, on the night I was to start varsity basketball as a freshman for one of the most prestigious teams in the state, I became violently ill; I had somehow perforated the upper part of my stomach lining. That resulted in bile leaking into my abdominal area, causing peritonitis. My lungs were also beginning to collapse from the pressure of the air escaping my stomach. I had to leave the game at halftime—I was rushed to the nearest hospital and remember so vividly laying alone on a freezing steel surgical table, as close to death as I had ever been.

Yet I was not afraid. At all. But not because I saw God or a white light welcoming me into heaven—but because morphine and highly addictive anesthetic drugs were coursing through my veins. These painkillers completely took away my anxiety when it was actually justified. I had never felt like this before: warm, safe, and unafraid.

The next thing I remember was waking up and being in excruciating physical pain.  But then I was given more of this magic chemical cocktail, and not only did my anxiety subside, but some of my physical pain as well. My parents and I had no idea at the time, but as this was happening, it was unwittingly changing critical brain systems.

As the National Institute on Drug Abuse (NIDA) explains, opioids affect the brain system that motivates a person to take more of the drug. At the same time, opioids cause changes in another part of the brain that limits a person’s ability to stop taking them. And as a practical matter, the opioids made me feel at peace. They made me feel “normal.” They relieved the constant pit in my stomach and sense of fear. In an ironic way, they improved the quality of my life (at that point).

I quickly became dependent on those drugs to complete daily activities and manage my emotions for many reasons, which include my genetic predisposition, my age when the drugs were first introduced (a mere 14 years old), the distinct genes in my brain, and other environmental and societal factors. Sadly, this all happened without my knowledge, like a slow-dripping faucet that leaks hundreds of gallons of water over time and astronomically increases one’s water bill.

Despite needing an increasing amount of painkillers to manage life, I was experiencing a lot of success by societal standards. I attended a prestigious private high school on an academic scholarship. When I graduated, I was an all-state soccer and basketball player and graduated ninth in my class, a member of the national honor society. I received a full basketball scholarship to the University of New Haven (CT), a Division 2 school. During college I received straight As and graduated as valedictorian, with a 4.12 GPA (for some A pluses). Not only did I play basketball and soccer, but I also played soccer for two years. Upon graduation, I was named an academic All-American and received an NCAA postgraduate scholarship.

Unfortunately, I kept experiencing serious medical conditions continued resulting in continual access to pain killers. For example, I suffered from additional abdominal issues, I had knee surgery, and I was also attacked by a dog and so needed skin grafting and seven reconstructive facial plastic surgeries. Of course, I continued to suffer with anxiety, and probably depression too, but I never realized it. I never thought of any mental health treatment or support. I had the pills, why would I?

After graduating college, I attended law school with the NCAA scholarship and other scholarships I received. I graduated with honors and was elected to The Order of the Coif, a national honor society for law school graduates. It seemed that I was at the pinnacle of my life. In reality, I was about to begin a deadly descent, both literally and proverbially.

As NIDA explains, “the longer someone misuses opioids, the less self-control the person will have; it gets more and more difficult to resist taking the drug, or to follow through on a resolution to quit.” That perfectly describes my experience. I was virtually controlled by opioids and could not exist a single day without a pill. I jeopardized everything that mattered to me for pills—my children, my law license, my marriage license, my home, my family, my driver’s license, and even my soul.

Tough love and criminal penalties failed. I had a disease which was negatively impacting my brain, and traditional ways of changing my behavior were completely futile. I spent time in jail, psychiatric wards, and other institutions... all to no avail. Then, in 2005, I fractured my left frontal lobe after a seizure and needed a life-saving craniotomy. As a result, I permanently lost hearing in my left ear, lost my sense of smell, and also suffered Bell’s Palsy. Shortly thereafter, I overdosed. The drug that I thought was improving my quality of life had completely destroyed it.

Another chemical, naloxone, revered the effects of the deadly overdose and saved my life. To further illustrate the power of this disease on my brain, I kept using the pills and then overdosed again. There was no proverbial “bottom” or lesson learned from the first overdose; there were simply more habitual and self-destructive behaviors which resulted from the profound impact Opioid Use Disorder (OUD) was having on my brain. In 2007, I could not bear living another day enslaved to opioids, but could not imagine or successfully live my life without them.

So, I attempted to end my life. For whatever reasons, I lived. The police arrested me and charged me with criminal trespass, then took me to the hospital where I was treated and committed (yet again) to the psychiatric ward. I remember feeling so empty, numb, and lost.

However—just as I once thought painkillers had been helping me live while they were killing me—just when I thought I might die, I was actually being reborn. I began a journey of recovery and wellness, and after seeking proper psychiatric treatment for my mental health issues, I never, ever took an opioid again.

Since I began my journey of recovery and wellness, my life has transformed in ways I could have never imagined. After nine months of being prohibited from having any contact (even a phone call) with my children, I was granted one hour per week of supervised parenting time. In order to prepare for that, I participated in individual counseling, attended parenting classes, and worked with a parenting mentor. I had never been a parent since I was abstinent, and I was scared and lost. Asking for help was difficult, but lifesaving. Slowly, over time, my children and I participated in family counseling, and we healed. Our relationships have grown stronger than ever, and the same is true for my other family members, including my parents and brother. When my parents died in 2014, I was absolutely devastated—but I was finally able to feel hurt and pain without trying to escape. I held both of their hands as they took their last breath on this earth, and we were all at peace. It was bittersweet, but a moment I cherish. My children and I have begun a small nonprofit in their honor called Hope is NEVER Lost.

Hope is NEVER Lost advocates for to reduce stigma and decrease barriers to treatment for those with mental health and substance abuse challenges. We also provide services and modest financial support for those in our community who have been negatively affected by mental health and SUD. I have fullness in my life and soul I never knew was possible. The life I live today is not always easy and certainly not perfect, but it is mine and I love it. I remain present in every moment. This is where my journey of health and recovery has led me. I am grateful and hopeful every day, even on the difficult days. I never forget that I was given a second chance that many with SUD and who overdose were not afforded. I carry their spirits in my heart and work and try to turn my darkness into light for someone else.

Today, I have been in sustained remission from OUD for over a decade. I have regained almost everything I lost, and even more. I am a mom to my kids and am able to be fully present. I remain permanently disbarred from ever practicing law again, but I returned to graduate school and obtained my Masters of Science in Clinical Mental Health Counseling with a concentration in Addiction Studies, graduating with a 4.0 GPA.

I have pivoted and recreated myself from scratch. Maybe in an ironic way painkillers did, in fact, save and enrich my life... just not in the way I initially thought they would. But for the grace of God go I.